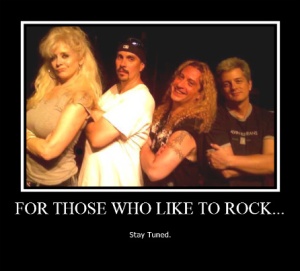 Well…it’s done.  I nailed the drummer.  In this case, nailing the drummer meaning his acceptance in joining the band.  Which is what went down last night (Saturday Night).

Since the moment I saw this drummer play, he sent every cell in my body stir crazy.  A powerhouse.  When he showed an interest in my band and then accepted an invite to come by to play with the band and feel things out, I was besides myself and very excited …but more importantly scared shitless.

I knew this drummer was not one who would just join any band regardless of any blonde, big-boobed babe that might have first inspired him to do so.  Not saying this was the case but nevertheless whatever may have drove him to be interested to begin with would not sustain him if the band he would be playing with did not have what it takes and that was made very clear to me up front.

Interestingly enough, I saw a major shift in my own thinking of what I wanted to do with music once this interest was shown.  I went from being happy enough just to have band practice and a gig here or there to all of a sudden writing songs and seeing a bigger and more serious take on the Rock & Roll scene.  I guess having the possible opportunity to have someone on board who I thought was that good and a “perfectionist” in his music, up’d the ante for me and I saw myself wanting to rise to the occassion.  I believe it touched something inside of me that was already there but was now being motivated to cultivate.

Nevertheless, I was quite intimidated and very nervous when last night we were all meeting to feel each other out, to include the guitarist,who was originally on board but with the understanding that he had another band that was “first” before I ever came along, who had been kind of slipping away from our band because he was getting stretched too thin and finding his other projects more appealing.  That was until last night…

The night started we me worrying that I had alot to lose if we all didn’t “gel” or “I” wasn’t up to par.  There was the possible loss of the drummer (who I didn’t even have yet), my guitarist (who was also using last night as a measuring stick if he should stay on board any longer) and then there was the bass player, who I wasn’t sure was on board with me regardless or because he liked playing with the guitarist and if the guitarist was goin’ bye-bye, maybe he’d be too.

If any of this was to happen, I knew I would be doubting myself and thinking maybe I was seeing this Rock & Roll thing through rose-colored glasses and that all my desire and what I see as a need to express myself through Rock & Roll would have to be denied and channeled somewhere else?  Where?  I could not fathom anything else having that much passion in my bones.

This was the risk I was taking by “suiting up and showing up” last night.  Seeing my truth and facing it regardless.  I couldn’t live with myself if I gave into the fear and didn’t go.  I had to go for it.  This was a shot to take me to where I now understood very well where I wanted to go.  With musicians I respect who I could feel in my gut should/would be with me on stage.

But…”those thoughts” would creep in…Maybe I wasn’t “good enough” or “up to par” with these talented and experienced musicians.  What if my voice wasn’t working the way it could…what if I forget the words and look unprofessional or too green.  What if, what if and then I said, “STOP”.  Just do.  Don’t think.  Just go.  Be.  Do your best.  Commit.  Think performance level.  Get out of your way.  Most importantly, don’t give a hoot what anyone else is thinking and who will stay or who will go and “fuck it”.  If things don’t go as planned.  “Next.”  If they don’t want to be on board.  “Next.”  Make it happen somewhere and/or with someone else.  Like any other relationship, there’s more fish in the sea.

So with a little help from a quick shot of Amaretto that I chug-a-lugg-a-lug-ed-ded (by sneaking out 10 minutes before showtime to a local pub around the corner from the studio where we were practicing in downtown-Manhattan) the show went on…..

We played as if we had been playing together for a long time.  An almost groove that we each fit just right in this little puzzle that we had.  We all knew most of the songs that were on the list or tossed out impromptu and if anything, just needed a little tweaking here or there.  I don’t think anyone would have believed it was our first time together and we shot out a number of songs that would have been right-on even in a professional situation which in my experience is quite uncommon with first time band practices.  We just clicked.  There was no doubt a sense that we all belonged right where we were and I think we all knew it.

So to make this long story short…..there is a new Rock & Roll band about to emerge that is going to rock your socks off…..so stay tuned (pun intended)…..and can anybody say “hell yeah”!

One thought on “Hell Yeah!”